The “dun Run’ has been going for 12 years now, its not like the others. No one owns it, no ones makes money from it and no one really organises it. Folks just know that at 9pm on the closest Saturday to full moon every July theres a ride from London Fields Park to the ancient seaside town of Dunwich on the suffolk close.

There is no signposts (some route plans are made by local clubs and available for £1) and no support. People along the way throw out camping tables on their front lawns and sell hungry cyclists anything from beer to brownies, profits normally for charity. Sudbury is the mythical half way stage where the local fire brigade put on bacon rolls and drinks, profits to charity.

I needed to get the train back form Dunwich, and I didn’t have a bike space booked, that meant I had to leave a bike with a friend who lives closed that meant I didn’t want to leave a favourite bike. Step forward the On-one pompino. Purchased as a bent frame and assembled for less than £100 it was perfect, but I was initially worries about that fact it was a singlespeed. The route looked flattish, but then they all do.

The first thing you notice when you arrive at London fields is how low0key and relaxed everything is. 4000 people, sure, but it doesn’t really look like it. A lot of people her doff a little early, a lot set of from around the corner. Its a par and its a hot day, so there plenty of boozed-up ransomers roaming around, as pictured… 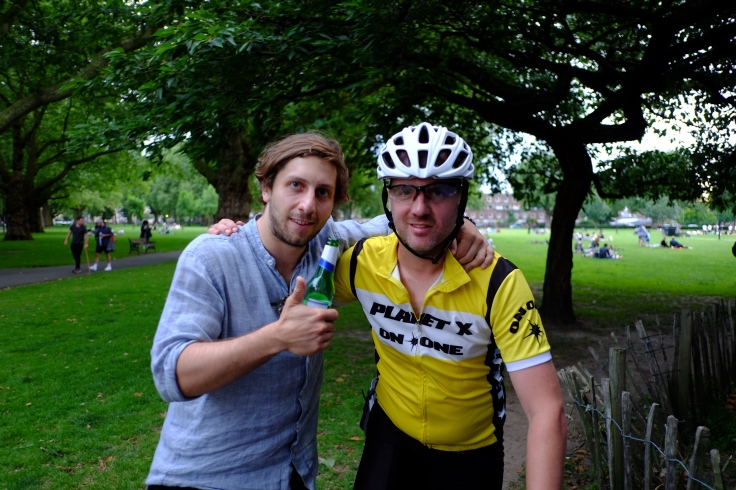 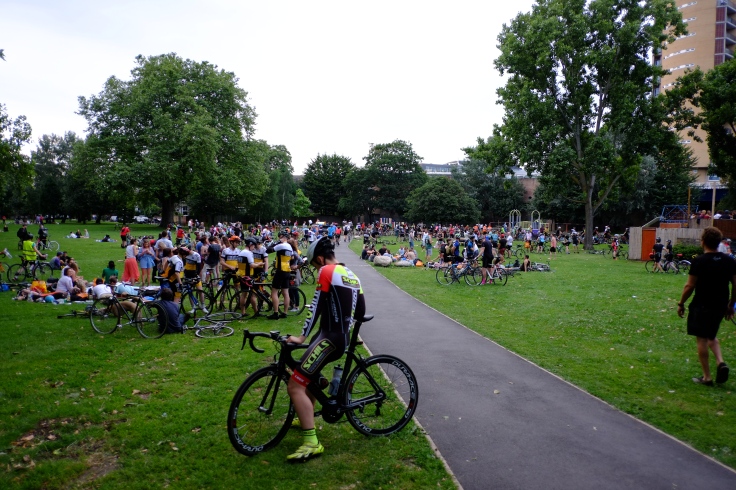 Continuing the low key feel people just start to float off. Its as incongruous as its gets for bike events these days. There a traffic jam and the first few miles go slow, but it does;t take long to get a rhythm going, next stop Essex. 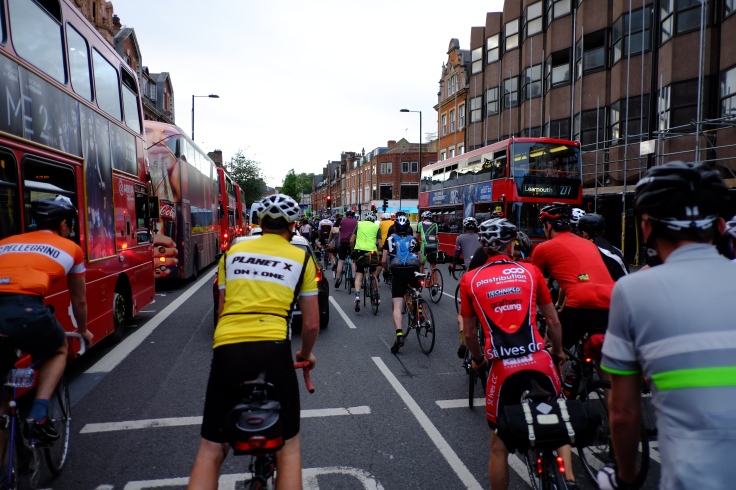 Theres plenty of clubs, and plenty of carbon, but really the events is a total cross section. Take the dude not pictured to my left in the above pic. Cut-off jeans, shirt, Muddy Fox courier with rack, dropped bars, sound system blaring from rack. plenty of town bikes, plenty of fixes, plenty of normal stuff.

Theres no signposts, you don’t need them, there are bikes and light everywhere in front of you and everywhere behind you. after a few hours its all you can see, pubs full of bikes, petrol stations full of bikes. Wonderful.

Of course as soon as you hit Essex theres a solid stream of abuse from out-voting motorists yelling at you for being alive, but only in the towns, and really you only dip through it, Suffolk isn’t far. It barely niggles to be honest, there are so many of you around and someone in a tight t-shirt giving you grief for blocking the road whilst he is simultaneously sending a text is much closer to laughable than intimidating. Sometime in the middle of Essex I am fairly sure I saw Mr Brompton Bumble B, but very hard to say for sure.

Time for the first pub stop just before the border. Heaving of course, no change; so pay card or be prepared to write off any left over cash. 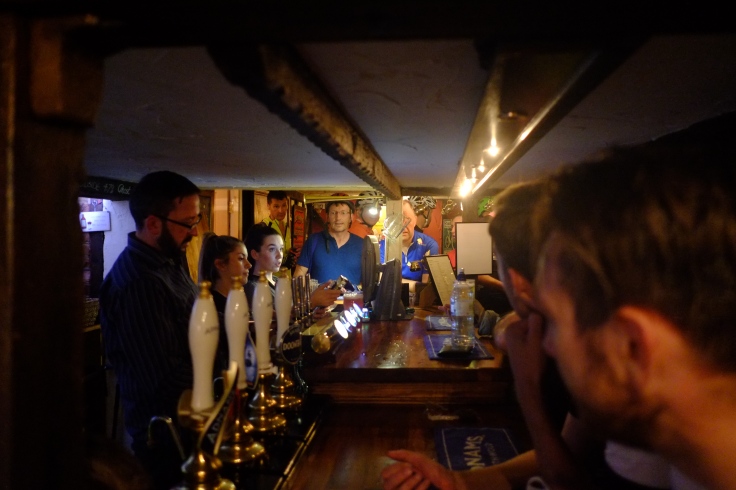 Most went for beer but too many miles to go and too much humidity for me to risk it. About that humidity: It was humid, and hot, 15º minimum even at 4am.

After that its a blur. Its a long way, but it doesn’t drag. There is always someone to talk to to, some music to listen to or something to see. Take the guys and girls on the made-from-four-bikes-bike-car-four-wheeler-contraction, they all had to lean in to stop thing thing toppling at every curve, but they kept in good spirits and made it to the beach. 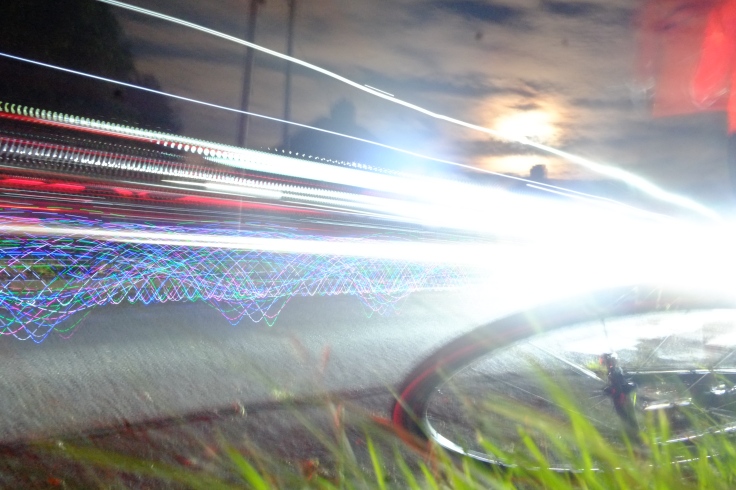 Ah the beach, lots of people are veterans, but for the virgins the beach is mythical. Everyone knows about it, everyone wants to reach it. How big is it? Is the sea warm?

Dawn comes and you realise you were on the bike when night came, and you are still in the saddle when it goes out the back door.

Then the beach looms. Dulwich is a small place, the kind where you can buy jam from an honesty box and its sleepy at 5am. I pictured seeing it form far off and watching it edge incrementally nearer. The reality is that its behind a headland and only visible in the last 2 meters. Even a stone beach can provide comfort after 8 hours it turns out. Theres a cafe whose english breakfast is said to be as venerable as its queue. 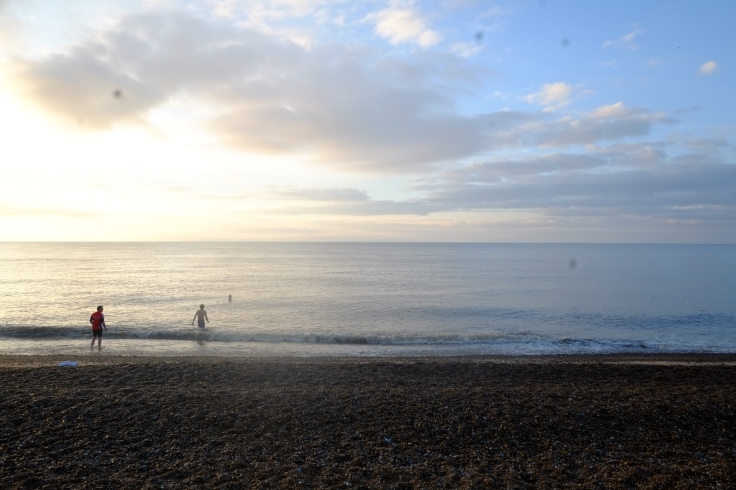 How was the single speed? Amazing, probably the tool for the job. I have ridden SS extensively, but after a lull I am always amazed how cathartic taking gears off your mind is.