Book Club – What Goes Around by Emily Chappell 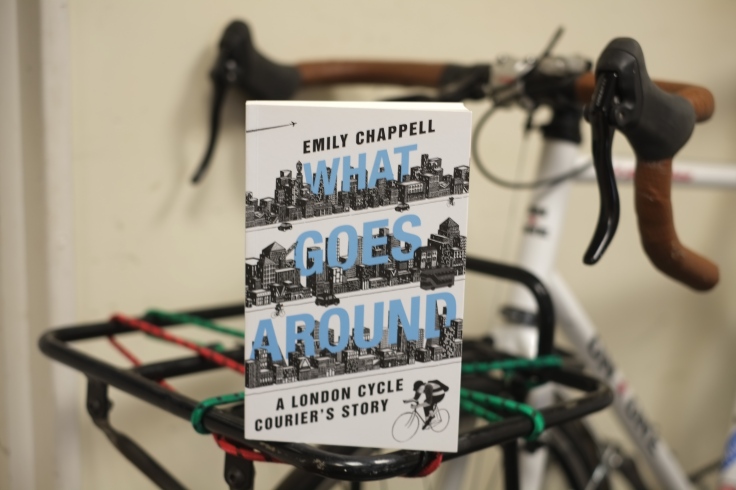 They say you should’t judge a book by it’s cover, not only is this the case here, but its also true for the title. This a memoir absolutely about a London cycle courier, but that is a summary only skin deep. This is a coming of age story and this is a story about one woman’s love affair with her city. Cycling is merely the glue that holds the whole thing together.

Emily Chappell hasn’t come from nowhere, she is a prolific blogger, both anonymously in the early days and they under her own name later. She is also a speaker/racer/respected proponent of female cycling and adventurer.

The book covers her coming of age from disillusioned academic postgrad to hardened courier, right up until the point she decides to leave it all behind her and explore the world (by bike) in her late twenties.

Chappell’s never-ending awe of London’s intricacies, smells, heartbreaks, triumphs, nooks and crannies is beautifully and vividly put across. Even the most committed hater of  the capital would surely book and train ticket having read only a few chapters. The book is so well written that you can feel tired when you hear of the long days, and happy as you hear about summer blossom falling onto the road. Couriering in one of the world’s most brutal jobs, and you get a real sense of the highs and lows of what it must be like in what must surely be one of the world’s most apathetic cities. There is plenty of funny moments, plenty of sad ones, its an honest account of a (near) decade well spent.

If you want bike stuff, DON’T PANIC, there is loads in there, its just wrapped in this extraordinary story, which is told so well.

What Goes around is out now and available in all the usual places, although Emily herself urges you to buy it from your local book shop (as do I).

As a footnote, I was lucky enough to attend one of the authors book talks, where we all found her to be just as much fun and just as engaging as her writing. She covered the book, as well as what she got up to afterwards, which included (but was not limited to) fat biking through Alaska in Winter, Cycling from Wales to Japan and taking part in the transcontinental race. Hopefully these books are being drafted as we speak.