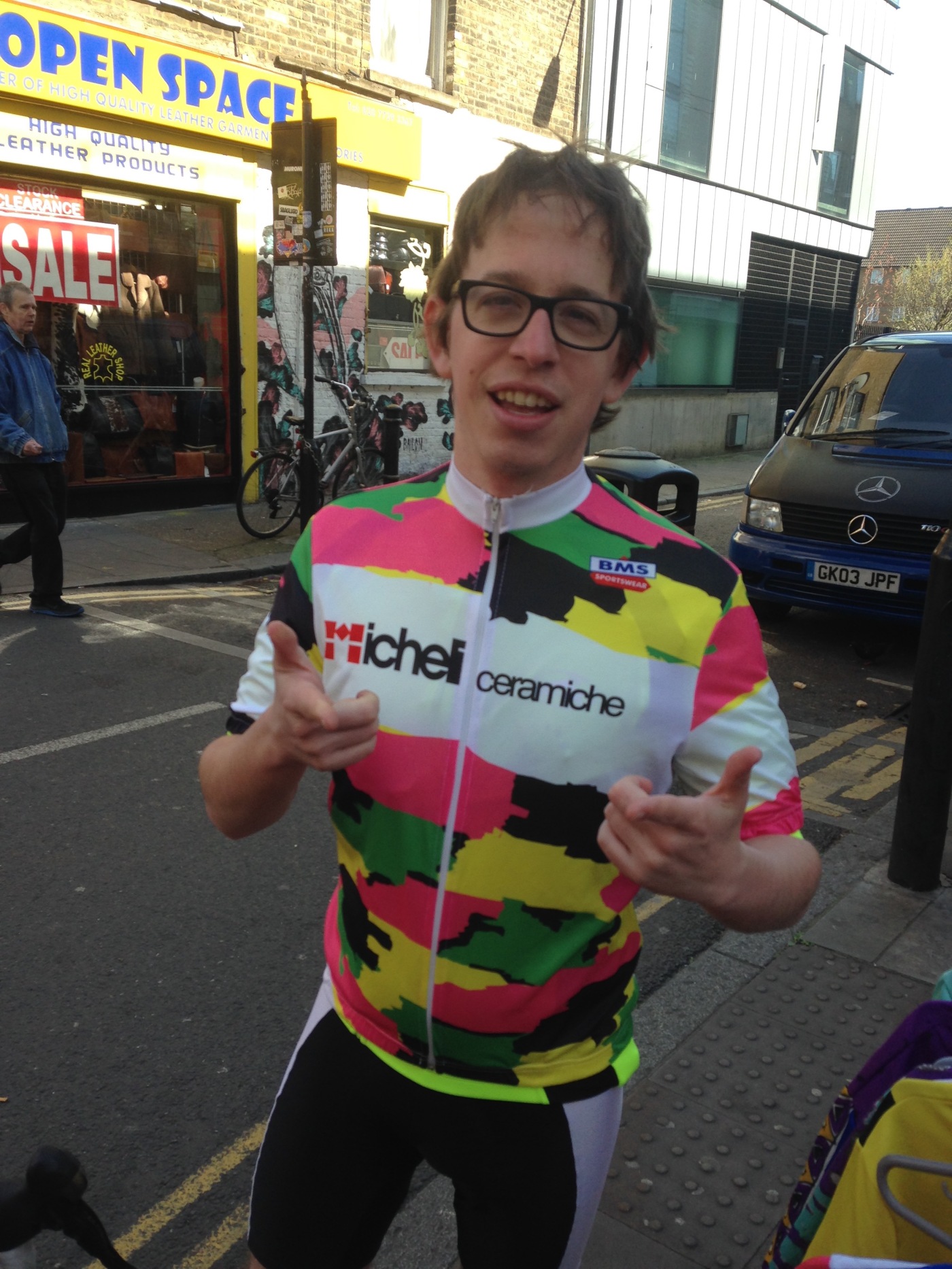 I love urban riding, and there are not enough events based around it in the UK. I also love the cobbled classics, I also love London.

As if made for me; the London Classic is a 40 mile ride in Central cleverly stringing together pretty EVERY cobbled road to be had. Whats not to like? Sure if you don’t like the majestic romance of riding on pavé, then it appears to be the bike equivalent your aunt finding all the worst parts of her allotment, and making them into a pie. I agree that a sprout, turnip, worm, blackbird and spade pie isn’t desirable, but its hardly an analogy you can draw. If you do, then you are too cynical….

It all starts in Crystal palace form the excellent Gypsey tavern. Then its north to Dulwich, Camberwell, Vauxhall, Lambeth, over the Thames, then Soho, Clerkenwell, Bethnal Green, Spitalfields, Whitechapel, Stepney, Docklands, west, over Tower Bridge itself, quick breath, now east to Southwark and Greenwich, the south through Forrest Hill and finally back to where we started.

It its seventh year the event is a true masterpiece, I don’t know how they know where all the cobbled roads are, and I don’t want to know, it can’t possibly be legit to hold such knowledge.

Its starts early and its cold. The road is heaving with bikes and people. Lots of machines in action, usual roadies, cool people, tandems (not saying they are no also the previous thing), brommies, pretty much everything. Quite sure I saw Mr Brompton Bumble B, but no way of knowing. 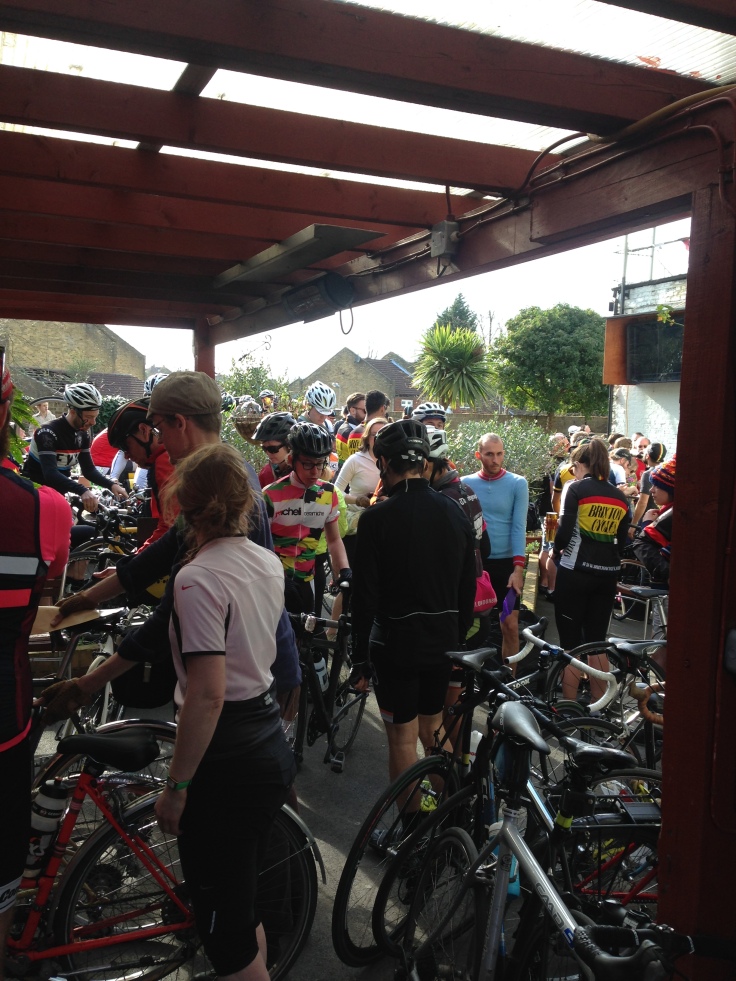 Its a chilled non-mass start as everyone heads north through Dulwich Park. There is the usual rutting by stags from local racing clubs, but its all a generally nice affaire. We won’t hit out first cobble until just after we cross the Thames and its a good warm up.

The cobbles come soon enough and they start nice and get rougher and rougher as we go. It comes to a head near Shoreditch (doesn’t everything) when a particularly large blighter tears two spokes out of my rear wheel. Cobbles, normal road wheels and 2000 watts don’t mix. This isn’t the kind of ride where people follow you in a broom wagon so it left a small quandary: how to fix the wheel. As luck would have it we were less than a mile from the fine folks at Brick Lane Bikes who kindly put in three spokes whilst I waited. Well I say “waited”, I was on Brick lane at the time eating currywurst whilst Ian was buying a retro jersey to try and fit in with edgy people.

Back on our way the route continued to be a delight, with he first bit of proper hard work coming in Greenwich when a headwind threatened our progress. As we turned south and off our last cobble (which, but the way, had ripped another spoke out) I thought “that was nice, what a nice ride…lets roll home”. A nice thought there slick, but it turns out London isn’t really very flat, in fact around Forrest Hill (clue in the name, I suppose) its a bloody nightmare. The hills just kept coming after that, in fact its a climb-athon until about the last half mile. 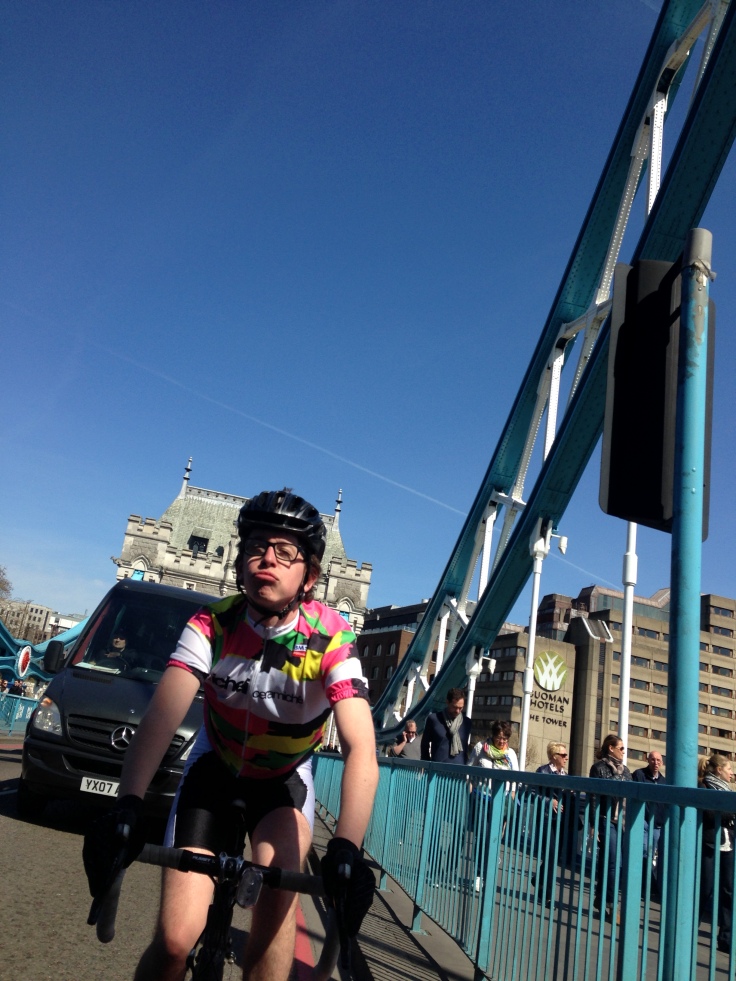 When you are back the party starts at the Gypsy Inne. Paris Roubaix is on the big screen (did I mention that its the same day?) and you are back with plenty of time for the final hour or two. There is also a cracking raffle and general handing out of goodies thanks to Lincoln from event sponsor Brixton Cycles. Some lucky bugger won a Surly frame, another brooks saddle.

Its a brilliant early season event, and its quite like any other, so don’t miss it. Word to the wise: Really look out for those route markers.

UPDATE: After 7 years the London classic is taking a break for 2016, and plans to be back in 2017. There are pans to ride in honour, which is easy enough to do. Route here

One thought on “The London Classic 2015”